Never too small, never too unimportant 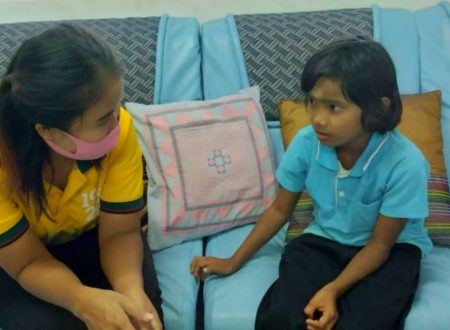 Thousands of undocumented Myanmarese children in Phuket suffer silently from the lack of physical security and food security but boldly assume their roles to do whatever they can to help their family survive. Getting to attend class at the Good Shepherd Centre Phuket Town gives them reprieve from the harsh reality made worse by the pandemic.

When a 7- year- old gets to go into a supermarket to pick up a treat for herself and she picks up a bag of rice instead, you know there’s a story begging to be told here.

The story is, rice has become a treat for this child. The story is she probably has gone hungry often enough to know what comfort rice can bring. The story is this child is trying to survive her impoverished state of living.

On finding the bags of rice stacked in a corner, this Myanmarese undocumented child Mon Non Site turned around and looked at her grandmother for approval before telling the sponsor who brought her there that she would like to have the rice instead.

Non Site and her 10-year-old brother were born in Phuket, Thailand but there are undocumented. These siblings have traveled thousands of miles crossing the Myanmar – Thai border with their family over several journeys to escape poverty. Each trip takes 2 days by boat, bus, taxi and on foot getting to Kawthoung island near Thailand.

Five years ago, after their parents broke up, their father left the family. It was difficult for their mother to find jobs and look after them.  She took them back to their village in Mon state, Myanmar hoping to count on her parent’s for stability and support to help care for her children.

But the job situation wasn’t any better on the other side of the border. The lack of food and jobs drove the whole family, grandparents and aunts included, to make the arduous journey back to Phuket where some of them found jobs. Their small house in the community was full with babies and those married into the family. With more mouths to feed going hungry became more rampant.

When Non Site was 6 her mother was killed in an accident and they were left in the care of her grandparents and an aunt. Their grandfather and the aunt worked as odd-job workers at the municipality. With 12 people in the family, there was never enough food.

As life became harder, it seemed like the right thing then for the family to return to Myanmar. When they arrived at the village in the Mon State, the family was worse off than when they left. In the six months they were there, they had no job and their house was without electricity and water supply. On several occasions, Non Site’s grandma had to borrow rice from the neighbours. “We were always hungry,” the only time Non Site spoke up as Sister Lakana who runs the Good Shepherd Centre, Phuket Town was relating her story.

Six months in abject poverty forced their grandfather to borrow 70,000 Bht from ‘agents’ to pay for the whole family of 12 to return to Phuket. Since then the family has expanded to 16 people but only four had jobs.

Even though they could barely stave off hunger, Non Site and her brother could still attend sessions at the Centre three times a week which include a meal for free.

Non Site couldn’t tell what she would like to be when she grows up but she is sure that her ambition is to grow up to look after the family. To ensure that her family would not be hungry anymore.

More than 200 children from the poor Myanmarese community in Phuket take turns to go to the centre 3 times a week. During this COVID 19 pandemic Sister Lakana tries to stretch her limited funds to keep the centre going as it is more than a learning centre for the children. The centre also collects grocery to be donated to the children’s families as many are already without income.

In support of the Good Shepherd Centre Phuket Town, author of Man In The Mirror, Paul Kam is donating RM10 from the sale of each copy to the Centre. The book can be purchased by sending your order to [email protected]