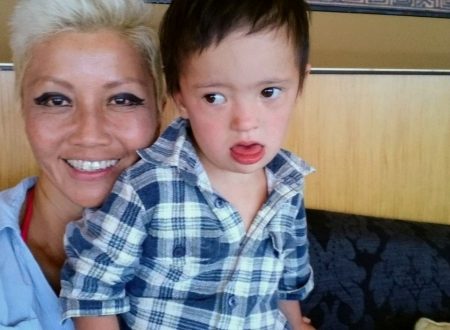 Jackie M is a celebrity chef who is collaborating with Tourism Malaysia, Penang State Tourism and a number of hotels on a project called Wok Around Asia. It’s an ongoing web series and travel guide with a focus on food, from the perspective of a cook travelling with a very special child.

But behind this Malaysian-born chef, who is based in Australia, is a fighter with an inspiring story. Her rise to fame came at the darkest moment of her life. Here are some poignant memories of her journey.

Is Jackie M a professional name and what was the name you left Seremban with?

Yes, my first husband’s name was Macedo, so I was Jackie Macedo (hence Jackie M) for the 16 years we were married, which was when I started my business. I was Jackie (Min Nyok) Tang when I left Seremban. 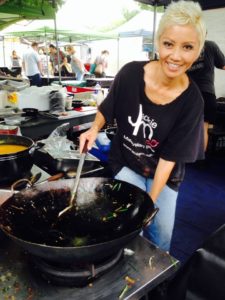 1. Of all the challenges that you have encountered professionally and personally, which one(s) was most formidable? Or are you still struggling to resolve it?

My biggest personal challenge took place 5 years ago when I gave birth to my son. As a newborn, Noah was diagnosed with Down Syndrome and an often fatal condition called hydrops fetalis; he spent his first 217 days in hospital, during which time he received 2 heart surgeries and a bowel surgery among many other procedures.

The doctors tried to convince me on numerous occasions to withdraw treatment and let him die, and I refused. I’m sure some of them thought I was deluded to think he would ever make it out alive, since I made a conscious effort to appear stoic in public. In fact, I would break down in private, during the daily drive home from the hospital or when I was in the shower. In my darkest hours I wondered if maybe I was in fact so deep in my despair that I’d lost my mind – that maybe instead of silently sitting and watching and whispering to him for hours in the ICU I was actually in a straight jacket in a mental hospital.

The most pressing incident took place at the 3-month mark. The supervising doctor told me that Noah’s heart was failing despite his first heart surgery and they would have to operate again or they would miss their window of opportunity. However, because he was so weak, they would need to hook him up to a heart-lung machine, which in turn would cause irreparable brain damage.

On those grounds, he strongly suggested I let him die. He said he could tell I’m the sort of person who never gives up, but that I should see it not as giving up, but rather, giving in.

I said no. I told him if the only option was to operate, then to go ahead. Turned out I called his bluff, because the cardiac surgeon refused to operate on Noah in that weak condition. She said she refused to be his executioner, and wanted to wait until he was stronger. So much for the “window of opportunity” argument.

Noah was transferred to the paediatric ICU where a different team of doctors looked at his very complex condition with fresh eyes, and suggested different treatment. As a result of that, he got strong enough for his second heart surgery after a couple of months, without need of the heart-lung machine. Talk about a blessing in disguise.

Today, Noah is an active, joy-filled child with Down Syndrome who makes me laugh every day, and who has touched and enriched more lives than, I guess, that ICU doctor could ever have expected. I continue to face challenges due to society’s perception of his special needs, but that’s another story for another day. 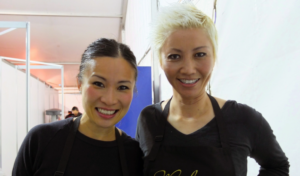 2. Are you a self motivating sorta person? Was a significant incident in your life where you really had to work hard at motivating yourself to get up and going again?

The day after I gave birth to Noah via emergency caesarean, I was contacted by Google Australia. They wanted to schedule a meeting to discuss Google Hangouts-on-Air, a new live video platform they had just rolled out. Keep in mind this was years before Facebook Live, Periscope and all the other live video apps that saturate the market nowadays. Google had noticed my activity on Google Plus and also saw that I owned a restaurant, so they suggested I could use live video to do online cooking demonstrations.

I was still recovering in hospital, my baby’s prognosis was very poor, and if ever I had an excuse to say no, that was probably it. I thought hard about it and then, via video chat from the hospital, I said yes, just give me 2 weeks.

My first live broadcast was a complete failure and a technical disaster, and I was trolled badly online for it.

I persevered and as a result of being an early adopter of live cooking videos, Google promoted my profile as a “suggested person to follow” on Google Plus, hence how I ended up with 1.8 million followers online.

3. How do you describe your own personality (yr strength and weakness) ? Do you think it was your natural talent that led you down this path of being a celebrity Chef? Or were you trained for it? 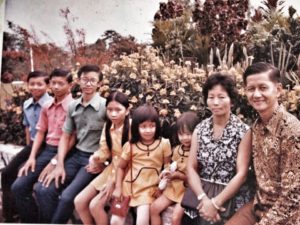 Like most people, my childhood experiences played a large part in moulding my character. My dad left school to support his family at 13 years of age, when his father died. He sold street food in Seremban, pushing homemade carts around town. By the time I came along, he had finally secured a small canteen inside the Odeon cinema, and I, along with my brothers and sisters, worked there every day. I saw how the Odeon cinema general manager bullied my dad, constantly giving him dress downs for no reason, threatening to raise his rent or kick us out, all the while helping himself to our food for free.

My dad had 11 mouths to feed and no education, so all he could do was smile, apologise and kowtow to the guy every time, then offer him more free food from our stall for the privilege of being humiliated in front of his kids. Which the guy never rejected, by the way. That memory formed the basis of my own path in life – I had nothing but contempt for the Odeon general manager, and I swore never to be in a position where I had to kowtow to self-important people in ridiculous suits when I grew up.

I’ve probably over-compensated for that experience through my own education and through a knee-jerk cynicism towards those in positions of privilege. If you’re the type who hides behind your fancy job title or your fancy car or your fancy designer labels, it’s likely we won’t have much to talk about at a dinner party.

I’ve also been described as someone with a take-no-prisoners approach to my work, and I’ve jokingly referred to myself as The Curry Nazi (à la Seinfeld’s Soup Nazi) because of the insufferable questions I get asked about the food I sell.

In my head, I’m not naturally-talented in any way. I do have a lot of resilience, and I do think that anything worth doing is worth doing right, whether it’s learning how to cook, or being comfortable in front of the camera, or anything else associated with my work. My advice to those looking to succeed is to decide what areas you need to work on, then be prepared to put in a lot of persistent, hard work until you get there.

4. What is your last thought before your head hit the pillow at the end of the day and what is your first thought when you wake up in the morning?

Honestly, because Noah refuses to go to sleep unless I’m in bed with him, my last thought is usually – I’m just going to lie down for 30 minutes until he falls asleep, then I’ll get up and work for a few hours. It follows that my first thought in the morning is often something like – ugh, I slept through the whole night again 🙂

On a more serious note, because I’m a member of some hydrops support groups, I spend a lot of nights thinking about these parents and their sick babies and praying for them. The odds of survival for hydrops fetalis are extremely low and there is a lot of medical pressure to give up. It’s sometimes overwhelming because it’s hard to keep track of all of them, and their stories and pictures are a constant reminder of the 7+ months Noah spent in hospital.

5. By your own standards, what are some of the incredible things that you have done?

I’ve acquired some academic and professional vanity metrics that are of no eternal consequence, so I won’t bore you with them. One thing that did change me was my experience with Noah; by God’s grace, despite my failings and brokenness as a human being, I found the strength to fight the good fight for him, and I hope my story in turn helps give strength and comfort to others undergoing similar challenges in their lives.

Re: What I’m shooting in Malaysia and Cambodia

I’m collaborating with Tourism Malaysia, Penang State Tourism and a number of hotels on a project called Wok Around Asia; it’s an ongoing web series and travel guide with a focus on food, from the perspective of a cook travelling with a very special child. It will feature videos and recipes from local chefs, and eating guides for each destination. 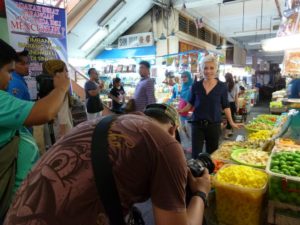 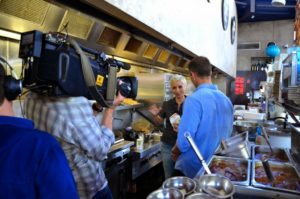