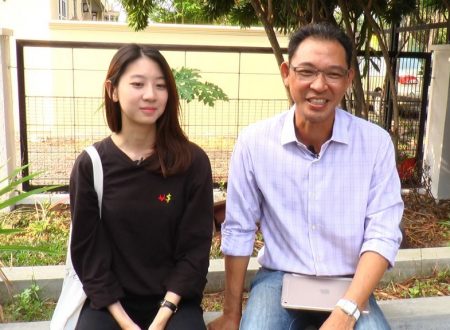 Barely out of diapers herself, so to say, young entrepreneur Tania Chang, 22, has decided on a job that requires her to play house, cook and be ‘mother’ to two teenage girls.

But Tania, who has worked a year as an interior designer, is well aware that this is no “masak masak” (child’s play) as it costs her parents-cum-investors nearly RM100,000 to refurbish and to furnish the house into a homestay.

If this wasn’t challenging enough, Tania was also in the midst of planning for her own wedding while construction was going on at the former childcare centre that belonged to her mother.

“This is one of the challenges as we will be a young newly married couple trying to look after ourselves besides looking after the teenagers.

“And no, I have not done much housework before but I will learn,” that note of determination is reassuring.

Tania’s husband is a Korean who had studied in Malaysia for 7 years and a boarder at a homestay. Both young entrepreneurs are keen to provide international students with a good home environment while studying in Malaysia.

The double-storey corner house in Bandar Sunway was a childcare centre (Taska) for more than 20 years until last year when Tania persuaded her mum to close it down and to convert it into an Air BnB facility or homestay. After giving it some thought she decided to run a homestay instead as this would ensure a consistent income for the next two years.

At a chat on Chalkboard with D Jungle Group MD Paul Kam, Tania explained that her parents had agreed to underwrite the cost for renovation and furniture. When the place starts to earn money, she would pay her parents rental.

But learning during the journey presented more challenges as the contractors were Indonesians and Tania was not conversant in Bahasa Malaysia. Getting them to do what she wanted proved to be a huge obstacle.

“Besides this, I had to work with a tight budget which meant I needed to keep some of the existing fixtures in the house. So I had to use my ID skills to decide on what to keep without having it look so awkward,” she said.

According to her plans, and if it all works out, Tania would still be working as an ID designer from home, and her husband would have his own fulltime job. They would have enough returns from investment to hire others to cook and transport the boarders to school.

Just before school started she managed to secure two teenage girls from her contacts and had a vacancy for one more.

To this Paul was quick to advise and cautioned against trying to do too much.

“So a word of advice. Entrepreneurs usually will succeed if you put your whole heart and soul into it. A lot of young entrepreneurs come out and they think they can do this.

“Maybe not homestay but these young entrepreneurs want to do business part-time while they work. And hoped the business would grow. Which is a very good plan because it would take care of security right? But you have to be very clear what your vision for the business is. And be very clear about timelines as well.

“You cannot be dependent on IF the business does well. It has to be WHEN the business reaches a certain stage this is what I’m going do. So to have that mindset when going into business is very important because the investment is not small. And you spent a lot of time and  effort, using your parent’s money and I’m sure they are also looking from behind, being backseat drivers, making sure that you don’t fail right?”

If all goes well, Tania’s father will consider renting another house to replicate this business model. Until then this young couple will have to endure a series of trial and error before expanding on their business venture.