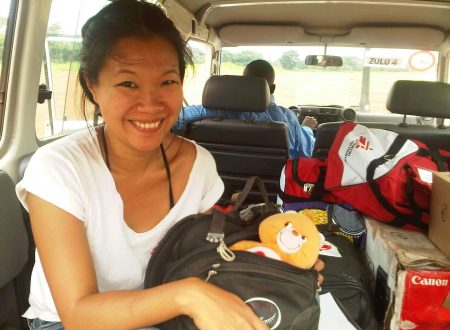 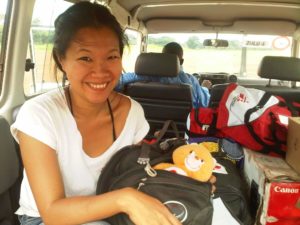 1.Why did you join MSF and describe your most challenging experience there?
Ever since young, I knew that I wanted to grow up to be a humanitarian. Big dreams albeit a bit woolly, spanning a large realm, hard to conceptualize what that would mean in reality. Joining Médecins Sans Frontières (MSF)/Doctors without Borders was a real concrete step towards realizing this childhood vocation. I didn’t come across this chance to work with MSF from the get go, it took me a while – building on various professional and personal experiences to arrive at MSF’s doorstep as a non-medical human resource. But I guess the stars aligned and when I came knocking, the doors opened.

The reasons why I ended up knocking at MSF’s door were principally because of the work that they do (medical humanitarian aid), the principles that direct the organization’s actions (neutrality, independence, impartiality – medical aid is given to anyone in need of it, regardless of their race, religion, gender or political affiliation), and their beneficiaries (people affected by armed conflict, epidemics, natural disasters and exclusion from healthcare).

By then, I also knew that I wanted to work “in the field” i.e. be out there on the front-lines, working with colleagues from different walks of life and to use the skills and knowledge I’d accumulated along the way to benefit those served by MSF, and at the same time, to be challenged and to learn more from the various new contexts I would find myself in. And by golly, was I not let down. It’s hard to describe just one particular challenging experience that I’ve had during the past 7 missions I’ve done with MSF – which have run the gamut from post-conflict settings to civil war contexts, refugee camps, epidemics and post-natural disasters. Each mission has had its own special challenges to offer!

If I had to choose one challenging experience to share about, I guess it would be during the Ebola epidemic in Conakry, Guinea. It was a challenging working environment on many levels. We were all working towards the same goal, bringing under control the spread of the Ebola virus, limiting its effects on the population, hoping to see an end in sight. But tensions ran high – imagine working against a highly contagious virus, that you can’t see (creates a bit of paranoia, even amongst the least hypochondriac of people), which seems to be ahead of the game, delivering more and more sick people faster than we could create safe spaces for them to be taken care of in, stress levels were high all around, everyone wanted to do their best and give their all, yet there we were – a motley crew of people, from different cultures, speaking various levels and forms of french (communication!), medics, paramedics, non-medics – all with different and competing interests at the helm amidst limited resources – nonetheless all the while trying to work together for the greater good. It wasn’t an easy working environment, with everyone working at their limit, highly stressed, trying to work together, to find that synergy amidst the generally organized chaos.

2.How did you handle the experience?
Believe it or not, simply by reminding myself to breathe in and breathe out! Taking a bit of time to zoom out and see the bigger picture. To strategize instead of feel paralyzed during moments of impasse. I also reached out to family and friends outside of the MSF bubble to ask for news from them – to remind me of what was going on elsewhere in the world, of the other realities ongoing at the moment, the other struggles and joys that those dear to me were experiencing.

Within the working environment, it was through choosing the right moment to approach someone to speak about problem resolution – choosing the best means of communication – not necessarily always verbal – emails, post-its, even using intermediaries when necessary. Seeking and creating neutral spaces to arrive at the kind of working environment that we needed. Looking for allies amongst colleagues to collaborate with – no (wo)man is an island, and even less so when the results that need to be achieved can only come by through teamwork and the synergy that comes from it.

3.What keeps you going on and if there was a moment you wanted to give up?
Oh there have been many moments where I’ve asked myself “Is this it? Have you reached your limit? Time to call it a day a pack your bags and go home?”. When I’m working on a field mission, it’s easy enough to overcome those moments – the quick fix is to simply take some time to visit the hospital, or clinic, or make-shift consultation area – see what my medical colleagues are up to, and the people whom we are serving collectively, and it helps refocus my mindset, reminding me of my purpose and role of being there.

It’s a different story when I’m not on mission, and I do wonder on and off if I should throw in the towel and opt for a different career path, a different lifestyle… but at the end of the day, at the end of my thought process, I still feel the pull towards continuing to be a humanitarian aid worker. It’s tough finding balance, but at the same time, after having experienced multiple 9-5 office stints prior to joining MSF, I swear, it’s such a gift to have found my vocation – having a job where time flies even when you work 12-hour days in difficult conditions, when meaning in what you do is so tangible, and despite the often grim situations that we work in – the brightest glimpses of humanity are ever present – it really is a gift and one that I plan on treasuring and discovering for a bit longer.

Background
Marie is a native of Penang, where she grew up for the most part of the eighties and the whole of the nineties. Since 2001, additional places she now calls home have come to include Grinnell in middle of nowhere Iowa, London and the Haute-Garonne area in Southwest France.
She is a Convent Green Lane and Uplands International School of Penang alumna and graduated from Grinnell College with a BA in French & Psychology. She also earned a MSc in Political Sociology from the London School of Economics & Political Science.

In 2012, Marie joined Médecins Sans Frontières/Doctors Without Borders (MSF),
a medical humanitarian aid organisation which helps people worldwide where the need is greatest, delivering emergency medical aid to people affected by conflict, epidemics, disasters or exclusion from healthcare without regard for race, religion or political affiliation.
She has since worked with MSF on its missions in Burundi, Central African Republic (CAR), Chad, Congo (DRC), Guinea, Nepal and Tunisia.