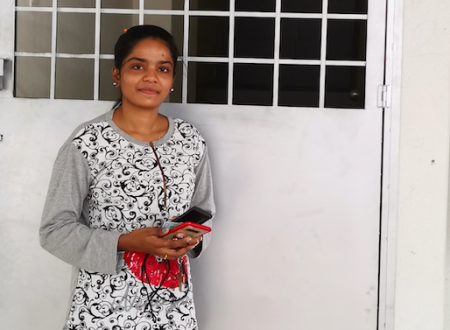 In the first of the series So ordinary, so inspiring  Siks Mikah met young Ruth Visvanathan who is constantly struggling, fighting fires and juggling in her effort to make a difference in the lives of children of destitute.

Here I am, on a lazy Sunday afternoon, browsing through my tablet and read with awe about Katie Bouman – Dr Katie Bouman, the young woman who created the first image of the black hole.

And against her Facebook post were accompanying messages of congratulations and thanks for her contribution to the advancement of science and mankind.

As I continued to be awestruck by the remarkable achievement of this young woman I couldn’t ignore the thought that just two days ago I had felt the same about another young woman.

She is also 29 years old, just like Dr Bouman, but she is not a scientist or any high achiever in the academic arena. Right across the globe from Dr Bouman is Ruth Visvanathan, a pastor’s wife.

Ruth runs a community kindergarten from the same building of the church to reach out to children from poor and destitute families. The kindergarten was set up with recycled or discarded furniture equipment. Most of her resources were donated and the families were charged a token sum to help with expenses.

Every morning she would fetch some of the students in her rickety proton saga to school and with some of the donated resources, Ruth and her sister-in-law would teach the children to read and write.

She would also teach them manners and to be God fearing. It’s been nearly a year now since the kindergarten opened and the feedback from the parents have been very encouraging.

“Some parents told me how their children’s behaviour has changed for the better. They would go home and teach their parents how to speak politely and talked about the manners they have learnt in school.

“I want children who are troubled at home to have someone to talk to here. One of the children who comes for before school care told me about her parents fighting and how her mother would throw things at her drunken father. This is very sad,” Ruth says. There are now 12 students in the kindergarten and she also run tution classes for a few of the older students.

With three young children of her own and two other teenage girls whom she has offered temporary shelter, Ruth has ten mouths to feed in the house. Juggling a tight budget and feeding the needy is not new to Ruth as she has been doing this for 10 years since she married Pastor Joshua.

She was 19 when she had to assume the role of stepmother to Pastor Joshua’s two sons after their mother was killed in an accident. She struggles to learn,by trial and error, how to handle rebellious teenagers and their angst.

For years Ruth had followed her husband to the street to feed the homeless – with her five children in tow. Every Sunday she would cook enough to feed 200 people. When donations were not forthcoming, they would use their own money to prepare the food. “Sometimes we would offer temporary shelter to a few of the homeless until they could get a job or get back on their feet. In my former house, they would sleep all over the hall and on the veranda.

“With so many to feed, we were always short of funds. But somehow I managed. We would eat lean but my children would never go hungry,” Ruth says there was a time when she fed the family of six with three meals for only RM20 a day.

Even though it’s a struggle to make ends meet Ruth will persevere to reach out to children in need within her community. Her kindness has not gone unappreciated as parents sometimes contribute whatever they can to the kindergarten.

“Some would bring tins of biscuits for the children’s snacks and the owner of the nearby mamak shop would send over freshly made idli (rice cake) for breakfast,”her look of weariness begins to fade as she talks about the community’s support.

Many of the children in the nearby flats are undocumented and they could not seek medical care from government hospitals. She is requesting for volunteer doctors to follow her on community visits to give the children a check up.

I can’t help but wonder if amongst the children that she has helped or taught, there will be some who will push through the barrier of destitute to become another Dr Katie Bouman.

Shouldn’t we also celebrate the work of Ruth Visvanathan?