It is easy to forget the needs of the aged and alone. 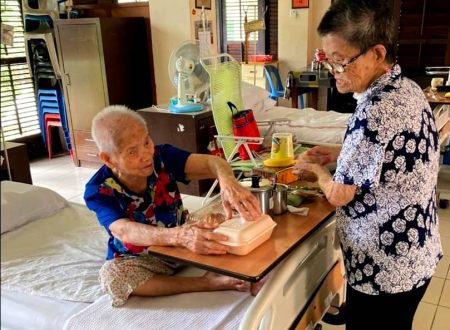 Peng Jie, a retired nurse, had worked in the leprosy hospital for 50 years caring for the patients and sympathising with their plight of being alone for decades. She continues to bring attention to their existence by appealing to donors to bring food and festive cheer.

Chinese New Year is just around the corner and Sungai Buloh nurseries are crowded with people shopping for that auspicious lime plant to usher in the new year.

Despite the prevailing Covid 19 pandemic, the narrow roads between the nurseries are crowded with bargain hunters who may be too preoccupied with the shopping to remember the need for safe distancing.

As the car manoeuvred past the crowds into an off-road leading into a guarded area which is the dormitory, a government facility, for recovered leprosy patients, one can’t help but wonder why there is still a need for this place as the leprosy colony has been closed 8 years ago.

Peng Jie, seated in the back seat directed the driver to the building where 50 old folks, aged 70 to 90 years were staying. These people have been relocated here to make way for the Covid 19 patients who occupied four wards a short distance away.

Even though the colony is closed, many of the empty decrepit chalets, that once used to house the lepers, stand waiting to be demolished. “The occupant has passed away,” Peng Jie pointed out to one that still had the occupant’s name on the door.

At the dormitory, as the carload of food was being unloaded and divided for the men’s and women’s sections separately, Peng Jie reiterated the old folks’ urgent need for food.

These 50 old folks, recovered leprosy sufferers, were brought to the settlement when they were very young. After they had recovered from the disease their families didn’t want them back and they had nowhere to go. As a result, the government had allowed them to stay on at the dormitory.

This is indeed ironical because this settlement was once known as the ‘Valley of hope’ where a patient who comes into the settlement would have the hope of full recovery and return to society. Owing to the stigma, many recovered sufferers spurned by society had decided to stay on and run the nursery business among others like themselves.

The settlement, nestled against lush green hills, was set up in the 1930s to give leprosy sufferers a more conducive place to be treated and to recover. The Sungai Buloh settlement was built by the British and it had put the country on the world map as the second largest leprosy centre in the world.

Peng Jie, 77, was working as a nurse in the leprosy hospital for 50 years before she retired and volunteered the subsequent years to helping those staying at the centre. “They do not have anyone to visit them and they have not stepped out of this settlement for decades as they are not allowed to leave.

” Last year before the MCO, one donor hired a bus to take all of them out to the city for a day. This is something I hope others would consider doing for them when the pandemic is over,” she said.

Peng Jie said owing to the pandemic and housing of Covid 19 patients at the wards, resources have been spread thin at the dormitory which includes food. As the packets of rice with braised meat and pickles were being handed out, one woman remarked “(I am) very happy today. So much food!”

These days, Peng Jie has chosen to stay in one of the old staff quarters to be near the dormitory and also to look after her 5 dogs. She did not want to risk infection travelling from her home in Bandar Baru Sungai Buloh to the settlement.

Peng Jie also keeps an eye on old folks leaving outside the dormitory as she hurried off to bring food to 85-year-old Chan Meng, a woman who lives alone in a wooden house next to the cemetery up the hill.

Chan Meng who was a recovered leprosy sufferer worked at the hospital as an assistant nurse until she retired. “During those days, no (very few) normal people would want to come and work in the leprosy hospital,” Peng Jie explained.

Limping from an arthritic pain in her leg, Peng Jie continues to visit the folks at the dormitory, helping wherever she can which sometimes include feeding those who could barely feed themselves.

She feels that these people are a lingering reminder of an era past, who never got to fulfil their hopes of leaving the Valley after they had recovered. But others could help bring them joy by donating food occasionally, visiting when the pandemic is over or bring them some festive cheer.