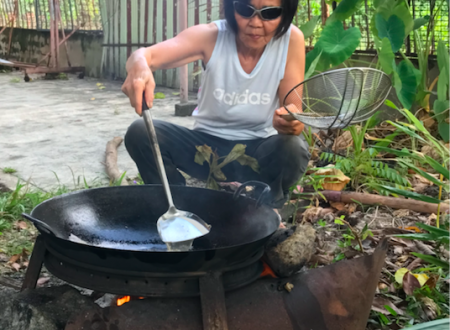 Mother’s day is just around the corner and the media are scrambling for the most deserving woman to feature and to honour. It’s not unusual that those with remarkable achievements and contribution to the community get to be at the head of the queue. But Siks Mikah heard this story of an ordinary woman and found it deserving to be retold on Chalkboard.

We can all remember what it was like to be a sick child  and burning with fever. Every second felt like forever as the heat seem to be burning through the eyeballs.

We can also remember someone’s hand gently touching our forehead and the whisper telling us it would all be well soon.

It was reassuring and comforting. Even though the fever barely subsidèd, you would look forward to another touch.

I am sure there is such a person in every family or everyone’s life – that someone who is always there during an emergency, emotional or physical, to make it all well again.

Margaret Choong, 74, is this person for her family and she is described as “someone you would want to have during an emergency. She would calmly go about rescuing the situation.”

Forty years ago Margaret worked as a mothercraft nurse for a formula milk powder company. She had to work long hours driving to small towns and villages like Jelebu, Kuala Pilah and Pantai in Negri Sembilan. This pint size woman had to deliver cartons of milk samples to clinics and hospitals. The hill roads were winding and you could see the ravine on one side. She would always return the same day so that she could save money from her allowances.

She worked hard and got up early in the morning at 6am to get breakfast and lunch ready, dropped her children at school in Seremban before going off to work.

Her family of 4 children then stayed with her mother in Lobak where Margaret also helped to look after some of her nieces and nephews. There was always one baby in the house besides her own 4 children. Margaret continued to juggle her work, finances and family.

She was very good with caring for children and they nicknamed her “baby whisperer” as she has a natural flare with calming babies.

No matter where she was, Margaret was never too far to rush home to deal with the children’s accidents, illnesses and injuries.

Through their growing years, her nieces and nephews had grown close to her because she spent time talking and guiding them.

Margaret is compassionate and generous even though they didn’t have a lot. She would always have enough to give, whether it was food to people who needed it or visitors who came by unannounced. They were always welcomed and she would never turn someone in need away.

During festive occasions, you would see her labouring over a log fire stove cooking her well-loved rendang under the noon day sun. She would also spend hours cutting up vegetables to make acar (pickle). As the eldest in her family,  since her mother passed away, this was perhaps one of her ways of making sure that the extended family continued to come together at least once a year.

She still stays up late way past midnight to cook and bake during the festive season simply because she knows how much people enjoyed her jam tarts and rendang.

Her greatest strength was her ability to juggle her finances – whatever little there was. Bringing up 4 children in the 70s, Margaret’s and her husband’s joint income was less than RM1500.

“I’m still amazed at the little that she and dad had but she managed to put their four kids through university. She also sheltered us from the fact that we weren’t well off. In fact, she would always tell us that we were rich, perhaps not financially but that we had a lot to give thanks for and to count our blessings. This was an important lesson for me,” said Margaret’s youngest son John Kam.

John, who is the CEO of D Jungle People training consultancy, recalled how his mother instilled discipline in them which they hated but admitted that it built character. “Everyday we had to practise music for an hour and to swim 30 laps.”

Margaret tried her best to provide for her children including the simple luxury of sharing an apple among the four children.

“On my 4th or 5th birthday, Mum saved up money to bring home a viewfinder as my present!” her eldest son Paul Kam remembered adding that his mother occasionally brought home  basketfuls of mangosteens and durians from her work trips to the kampungs,

Margaret quit her job at 50 because she disagreed with her boss on principles of work. “She taught us a lot about values – to be honest, don’t lie and be strong,” values that go on to guide Paul through life and in his business as Managing Director of D Jungle Group now.

“She worked hard. Like the energiser battery, she could go on and on and on!” John added.

It doesn’t matter if we tag them as unsung heroes, Florence Nightingale or ‘energiser battery’ Mums, Margaret and many others like her are reliable and will always come through for their families.

To all these so ordinary yet so inspiring mothers, Happy Mother’s Day!