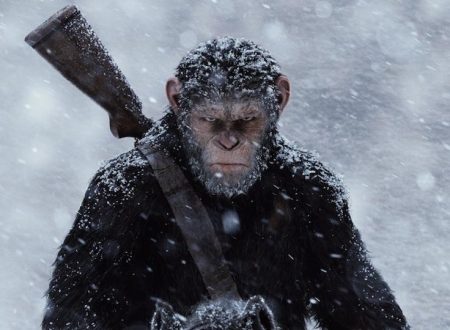 Photo: War for the planet of the apes, 20th Century Fox photo

Movies are often avenues of escapism. It’s a chance to be entertained and dwell in a virtual environment to rest the mind. But sometimes movies send you straight back to reality as PAUL KAM found out from watching War from the Planet of the Apes.

Which aspect of Caesar’s character strikes you the most in movie?

Empathy, compassion and non prejudice. Despite being at war with humans, Caesar did not forsake the little human girl although the easiest thing would be to leave her behind. Although reluctantly, he assented to the girl coming along. Teaches us not to distinguish by race or colour. The girl ended up saving his life.

What did you derive from Caesar’s role as a leader?

Leaders role is to bring a group of people together and inspire them to fight as one unit. The code sign of putting two fists together with the phrase “apes together strong” created a bond among all the primates that made even the human army fear them.

The leader must also have a clear goal or vision. In the movie, Caesar promised to guide the apes to peace. Despite the numerous attacks and on- going battle, he inspired the apes by his calm demeanour and strong belief that peace and a promised land for apes could be attained. And through out the movie, Caesar never lost sight of the goal. No matter the obstacles or difficulties he faced.

How do you relate this to the corporate world?

Once the mantle of leadership is taken on, a leader’s life is no longer his. He must always think of the collective. (Point of discussion would be the colonel and his vision. He sacrificed his son for the benefit of all the rest. Or so he believed.) Despite having his family being killed, we find that only when he has let go of his desire for vengeance could a bigger goal of freeing the apes be achieved. Vengeance caused him to abdicate the leadership role of the apes. It also caused the death of his dear Friend. A leader cannot be consumed by anger.

Bad Ape was an ape Caesar found was afraid of his own shadow. Yet, through the power of persuasion, Caesar persuaded him to show them to the human fortress. By sharing a part of ourselves with the people, it builds trust. It shows that we are just like anyone else despite our leadership position and that at the end of the day, we all have our own fears and challenges.

Leadership is a way of life. We don’t get to choose when we lead and when we don’t. A leader must lead whether in war or suffering or in the comforts of our air conditioned office. Even in the quarry, Caesar stood up to protect the weaker ones. In jail, he did not abdicate his responsibility and still led the others to freedom.

And like everything in life, there will always be one moment where our lives are changed or where the leader can make a difference in changing the tide. In the quarry, when another weaker ape was being whipped, Caesar could not stand by and watch. He stood up and made them stop, even at the cost of his own suffering.

Paul has led a wide range of start-ups successfully and currently manages four organisations in multiple industries. He has demonstrated clear strategic thinking capability in setting clear business modality, direction and goals. He has worked extensively with both private and public sector leaders throughout Asia and has designed and led several transformation, alignment and strategic change initiatives.

Why we all need better negotiation and persuasion skills

A case study on cross-functional skills. Whether you are aware of it or not, all relationships are a negotiation. Most...

Employee basic skills are suffering due to the new normal.

Leaders play a bigger role than they realise in developing their team’s basic skills. We recently analysed learning needs from...