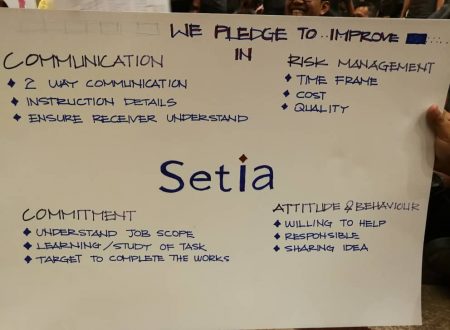 Three people were placed separately in the 4 corners of a room.

It was an exercise to relate communications in futility.

Most times it reflects how communications go awry when no attention is given to clear and concise messages from the top resulting in confusion being cascaded downwards.

If the supervisor or manager does not specify “what is dark” then the subordinates down the next level will be left to guess based on whatever knowledge or experience he has stored up in his mind.

Think of the mind as a huge archive or warehouse. Imagine it is like the humongous structure in the US TV series Warehouse 13. In the story it is a secret warehouse in the middle of a desert in South Dakota that contains mysterious strange artefacts acquired by two secret agents based on paranormal sightings reported.

And in that warehouse every artefact has a story to its existence and how it was retrieved.

Similarly our minds have an archive of words and images that we have collected through our journey of life. Therefore, when prompted by what we hear and especially if much of it is unclear and left to our own interpretation our mind will pull up images to help us understand the message we have received.

Each of us may hear the same words but because our backgrounds and circumstances differ individually we tend to come up with different interpretations.

The result will be confusion and frustration as receivers will act on inaccurate thoughts which are based on the receiver’s own interpretation of message and not based on the meaning intended by the sender.

According to CEO of D Jungle People John Kam, “People have to take responsibility for the effectiveness of their communication skills.  When people don’t take the responsibility it will usually result in mix ups.”

At the ‘Turn It On’ training programme for S P Setia recently, John broke down the process of communication into 3 components namely the sender, receiver and the message.

While the sender has the responsibility to craft his messages carefully and deliver them effectively, the receiver is responsible for being able to listen well and know when to seek clarification if there is a doubt.

For instance, if the second person would ask what is dark, it may avoid an inward interpretation that resulted in I cannot see. To ask questions in seeking clarity is an effective filter to getting the right message too.

Effective communication is an essential tool to being a good leader. And communication is not only verbal. Two other forms are non-verbal (body language) and written. Remember that not saying anything is still saying something.

In written communications, it is always useful to let anecdotes explain a complicated issue. There is an art to writing clear messages and this is a separate course by itself.

To recognise that it is a responsibility to communicate effectively is already a start. “We will improve communication by clarifying, justifying and following up,” read one pledge at the close of the S P Setia programme.

“Communication is a skill that needs to be acquired and more people should make an effort to consciously learn and improve on it,” John advised.