Chasing a dream during the pandemic 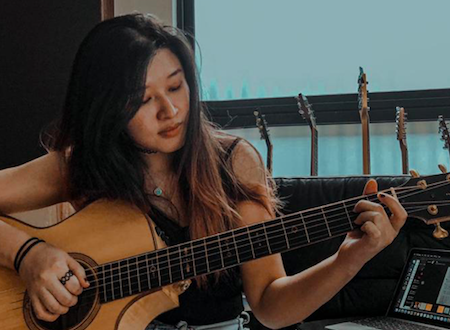 Young songwriter Diyana Chan spoke to Chalkboard about choosing to walk on the bright side of the Covid 19 pandemic to launch her dream career in music.

Diyana Chan was 14 when she wrote her first song, inspired by a heartbreak, and sold it a year later for RM200.

It was not much but that ballad I’ll Always Remember You https://soundcloud.app.goo.gl/MQ4LaZHK7A7x4Uwk8 was the seed of a dream career in music that she had kept on hold for many years :”It was ironical that my parents who gave me piano lessons when I was 3 had never intended for me to have a career in contemporary music.”

Her parents, like many asian parents, believed that if she failed to succeed academically, then being a piano teacher would be good career insurance.

Diyana, 27, was accepted into the Berklee College of music in Boston, USA but gave it up because of her parents’ objection.

She went on to pursue a degree in broadcasting in UTAR and worked for WebTV Asia as a content producer for music videos and wrote scripts for movies.

During the MCO last year, she was tasked with producing an asian all-star livestream concert, One Love Asia, that was supported by Youtube and UNICEF and hosted by Choi Siwon.

Dealing with international artistes and their management, coordinating activities across timelines and dealing with last minute changes catapulted her learning experience in the music industry.

But standing in the shadow still was her first love – writing and performing music. When she was 12, she met legendary Malaysian drummer Jerry Felix who gave Diyana her early experiences in performing by inviting her to do gigs with him.

Working on the digital platform during the pandemic last year showed her the immense potential for publishing her music in the current environment. “I could see the silver lining (to the pandemic) and I took the leap of faith to go into writing music full time.”

She found her big break when she managed to push Strangers Again https://open.spotify.com/artist/7miK1EVFvsAfWgwvmPCcL0?si=IR_SkBb2TP2i-l66it-UoA&utm_source=copy-link onto Spotify, a song she performed with singer Daniel Wong during Urbanscapes in 2019.

“Because of the pandemic there are many more people on digital platforms and this inspires me to continue writing more songs,” says Diyana who has written 40 songs since her first and sold 5 of them.

In March 2020, she was invited to perform on FB livestream Drum Asia and this has boosted the response and support for her songs. She now supports herself with the royalties she received from the songs she sold.

It was here that she met a music producer who offered to work with her on a new song that caught the attention of Warner Music International. While her goal is to have her songs achieve half a million hits, Diyana realised that she needed more than just picking up the guitar and writing a song.

“Besides writing the lyrics and melody, the industry now expects you to produce the backtrack and find the artiste to sing it too. I am taking this opportunity to learn from my friends in this field so that I will know my worth,” says Diyana who sings her own songs, which are mostly pop ballads and  electro pop, at open mic.