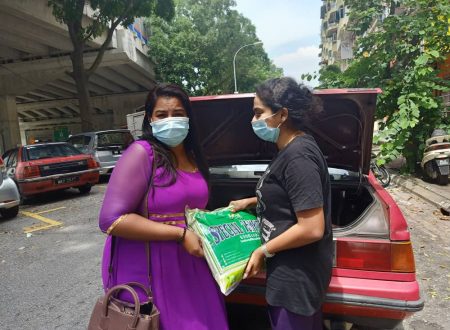 Siks Mikah tells one more story to wrap up a year that could surely do with more compassion, love and trust. It is a story about Annie Malar who draws strength from her well of faith and giving when she has little.

It was Christmas Day when I texted my friend Annie to wish her Merry Christmas. She replied: “I am now in Penang. My cousin brother passed away. No one to take care of wife and two young kids. 2 and 3 years old. Wife don’t have support.”

Several messages after, I found out that her cousin had committed suicide as she had mistakenly sent me a photo of him hanging from the ceiling. It freaked me out to say the least.

And my mind conjured all sorts of images of this capable woman going about getting matters done from getting the body down to consoling the immediate family.

None of that happened. But I wouldn’t be surprised if it did because Annie is constantly struggling and juggling to look after her family of six children plus another foster son who came from a broken family and whoever else who needed a temporary shelter while they sorted out their lives.

The ages of her own children range from 19 years to a few-month-old baby. Her husband works as a driver and serves as a pastor in a Tamil church in Old Klang Road.

Annie needed to rush to Penang urgently but it was also Christmas. So she packed the family into the car and took them along. “she is very young. The children are still small. She is good wife but no support. And also no coffin,” Annie wrote.

Her selflessness and generosity make her such a remarkable character. At 30, she continues to struggle, as she had all her life, to keep family and community fed. I remember how she used to labour over pots of sambal, rice and eggs cooking for the homeless.

During the MCO Annie would give away part of her food aid to the church community who came from the low-cost housing flats nearby. When she’s not tending to her family she would drive for Lalamove. Occasionally she would also squeeze time to take senior citizens for their medical checkup.

She had initiated many small projects to supplement help put food on the table like setting up a childcare centre. But this didn’t now work out because she was serving in the low-income community which meant she had to charge only a token sum or not at all.

Annie also tried selling food to the community and supplying to coffee shops but there were no takers. She offered babysitting services but that didn’t work out too. Out of desperation, she asked her daughter to take packed fried rice to school to sell to her teachers.

I wasn’t surprised when her subsequent message read that she would be bringing the widow and the two young children back to Kuala Lumpur so that she could care for them. This would mean 8 kids and 3 adults to feed.

So I asked, “How will you support everyone?” “Definitely God will give!” she replied. Admittedly, I was embarrassed by my lack of faith.

A few years ago Annie told me, describing in detail, how she could feed her family of six with 3 meals a day for RM20.

Out of necessity, Annie became resourceful and made her money stretch. Out of compassion, she rushed to attend to her cousin’s widow after the suicide. Out of being humane, she took the young widow and her two children under her already crowded roof. And, out of desperation, she rose to the occasion to manage one crisis after another.

With unwavering faith, she continues to serve her community. It is not difficult to compare her qualities to that of a corporate leader. Yet Annie is not spurred by perks and remuneration but by her love for the people and her trust in God.